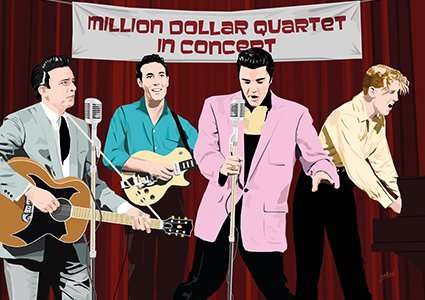 On December 4, 1956 Elvis Presley, who was already recording for RCA, visited his old record company SUN Records. SUN recording artists Johnny Cash, Carl Perkins and Jerry Lee Lewis were also there. An impromptu jam session ensued and Sam Phillips (owner of SUN Records) realized this was something special and hit the recording button. He recorded the whole session were they tackled around 46 songs. Most of them only segments of songs with a lot of talking in between. Because of all of them being (or to become) well known successful recording stars the ensemble is referred to as the Million Dollar Quartet. The legendary session inspired a musical that debuted in 2007 and a short lived TV series that was discontinued after its first season. This work depicts a fantasy  of what could have happened if the group had decided to take to the road. (Obviously something that was never even remotely likely.)

Obviously no further introduction needed. Even during the session Elvis was already on his way to becoming the biggest star the world has ever seen.

Was at the beginning of his career at the time but went on to become one of the biggest country stars of all time. He later had big hits with 'I Walk The Line', 'Folsom Prison Blues', 'Ring Of Fire' and  many others.

When Elvis left SUN Records Sam Phillips thought Perkins would be bigger than Elvis. Unfortunately Carl lacked the charisma but was a great songwriter. His 'Blue Suede Shoes' is one of the most well known songs of all time.

Rock and Roll's bad boy was fairly unknown when the session was recorded. But he became one of the world greatest rock and roll stars with hits like 'Great Balls Of Fire'. 'Whole Lotta Shakin' Going On', and 'Chantilly Lace'